By using ChartSwap over a traditional, internally based record fulfillment process, EMBCC was able to begin transmitted both electronic records and paper records via a simple and HIPPA-secure online portal – rather than relying on the slow-moving and often inefficient postal service method. 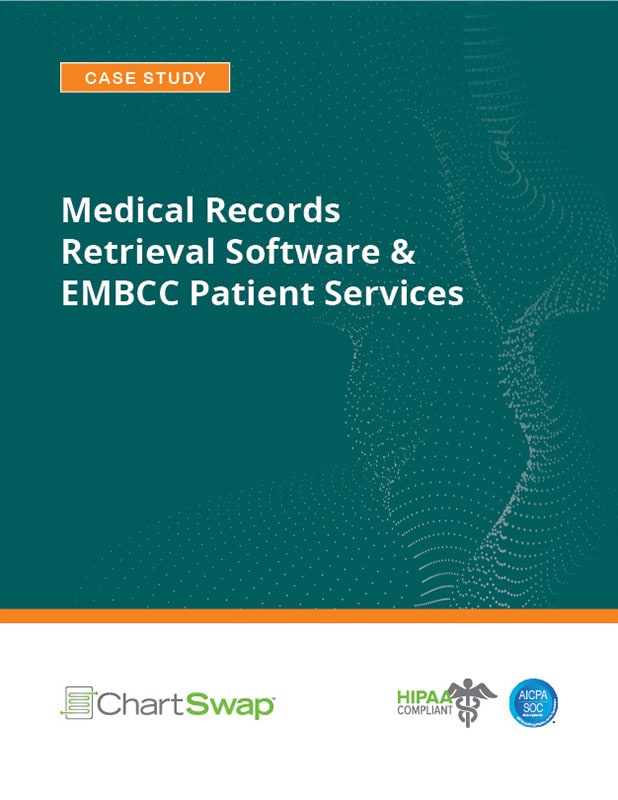 In December of 2017, EMBCC merged with another company that was currently using the ChartSwap platform for performing internal record retrieval processes.

Before the merger, EMBCC spent close to a year searching for a better way to respond to record requests. EMBCC Offline Supervisor Xiomada Cavalier, who was one of the two main decision-makers in the choice to switch to ChartSwap, described the traditional process as very manual and cited several issues that considerably hampered employee productivity and also increased internal costs.

Some of the specific problems EMBCC experienced, before utilizing ChartSwap for record requests, included duplicate work by staff members, requestors stating that they did not receive the requested information even after it had been sent via USPS and a large number of costly resources being required to complete the process.

As Cavalier explained it, ChartSwap allowed EMBCC’s 20+ staff members utilizing the technology to become much prompter when responding to record requests and also more adept at adhering to state-mandated guidelines that govern the process.

“By using ChartSwap, all requests are worked in a timely manner and in the order received. If we receive a request, and the deadline is approaching, [we] will receive an email from ChartSwap – informing [us] of the due date,” Cavalier said.

Cavalier also touted the excellent communication that ChartSwap’s staff offered to her team, explaining that the company’s representatives were speedy to respond on the rare occasion that issues should arise or if changes needed to be made on a particular response.

She described the switch from EMBCC’s manual process to ChartSwap’s technology-driven solution as a natural adaptation for her team to make.

“This was an easy process,” Cavalier said. “Chart Swap was very helpful, knowledgeable and prompt with the training process – which made this a very comfortable transition.”

By using ChartSwap over a traditional, internally based record fulfillment process, EMBCC was able to begin transmitted both electronic records and paper records via a simple and HIPPA-secure online portal – rather than relying on the slow-moving and often inefficient postal service method. Additionally, approximately 90% of requestors began paying for records electronically – using ChartSwap’s quick and convenient online payment platform – which meant no more sending out invoices by mail and then waiting weeks to receive the funds.

In addition to tremendously reducing costs on things like postal service, lost checks, faxing and printing services, ChartSwap was also able to effectively increase employee productivity at EMBCC by as much as 50% overall.

All of those benefits added up to an increase in annual revenue growth, according to Cavalier – not to mention a more streamlined and efficient process for one of EMBCC’s most challenging operations.

“With the use of ChartSwap, the team has been able to keep the requests organized and worked more efficiently,” Cavalier said. “Prior to ChartSwap, all requests were distributed amongst everyone on the team. Now, with ChartSwap, only a portion of the team is needed to work on these requests, while the rest can focus on completing other tasks.”

Using ChartSwap effectively transformed the record request fulfillment process for EMBCC by leveraging technology to replace manual procedures that have become outdated and costly. With a significantly decreased turnaround time on record retrieval, EMBCC employees are now better equipped to do what’s most important: growing their company.

Ready To Save Time & Money When Requesting Medical Records?